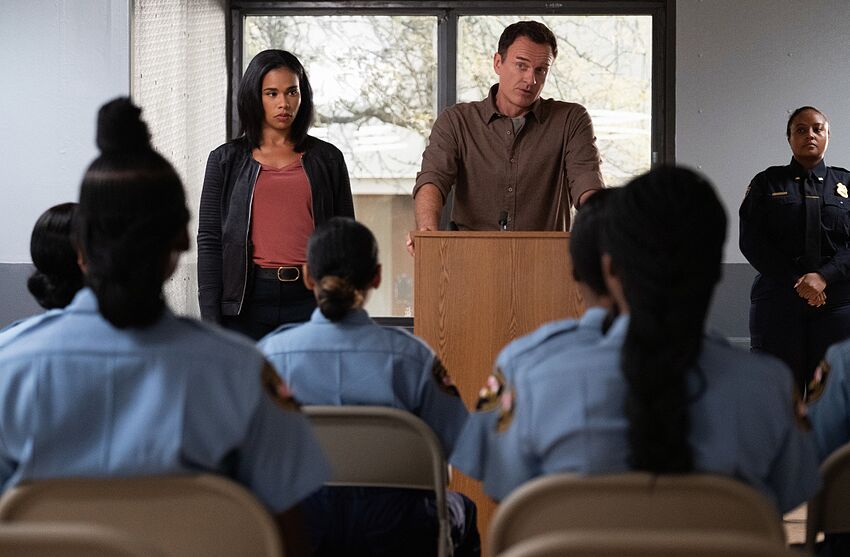 "Defender" - A single mother goes into a deadly rampage at a Public Defender's office, taking justice into her own hands after her son is given a harsh sentence for a petty crime. Also, Jess worries how his daughter Tali is handling life without her mother, on FBI: MOST WANTED, Tuesday, Jan. 14 (10:00-11:00 PM, ET/PT) on the CBS Television Network. Pictured (L-R) Roxy Sternberg as Sheryll Barnes and Julian McMahon as Jess LeCroix Jeff Neumann /CBS ©2019 CBS Broadcasting, Inc. All Rights Reserved

FBI: Most Wanted has only aired two episodes, but there’s been a consistent heart in the lead character. The show’s New Year’s Resolution is to keep that.

If there’s one positive thing to take away from the first two episodes of FBI: Most Wanted, it’s that Jess LaCroix is an excellent lead character for the series. Julian McMahon is an excellent actor, and delivers the heartfelt, understanding character.

As we look at the New Year’s Resolutions, we’re looking at FBI: Most Wanted. While it has only had two episodes, there’s something promising that it needs to keep going.

The show: FBI: Most Wanted

Why it needs to be made: The majority of TV crime dramas will opt for some cliche storylines when it comes to the lead. One of those is a jaded look at the world based on everything witnessed over the years. There’ll be that pressure placed on the suspects as a way to bring them to justice.

More from FBI: Most Wanted News

FBI: Most Wanted has stepped away from that immediately. Just in Episode 2, we got a look at how he can be compassionate towards the suspects while protecting other people. He wants to get justice, but he doesn’t want to necessarily be the bad guy that FBI agents are viewed as.

In fact, there was a moment in the second episode where LaCroix even understood the suspect’s actions. After hearing about her son and the way the lawyer was overworked (and just didn’t seem to care), LaCroix was able to sympathize. There was even an element of empathizing with the suspect.

Of course, there are times that he will need to put on the pressure. He’ll need to play bad cop here and there. However, what I need to see is that he doesn’t quite lose the ability to empathize. “Defender” – A single mother goes into a deadly rampage at a Public Defender’s office, taking justice into her own hands after her son is given a harsh sentence for a petty crime. Also, Jess worries how his daughter Tali is handling life without her mother, on FBI: MOST WANTED, Tuesday, Jan. 14 (10:00-11:00 PM, ET/PT) on the CBS Television Network. Pictured (L-R) Julian McMahon as Jess LeCroix, oxy Sternberg as Sheryll Barnes and Da’Shawn Jackson as Kendall Tyson Jeff Neumann /CBS ©2019 CBS Broadcasting, Inc. All Rights Reserved

In a way, I do find it humorous that it’s McMahon in the role of a character with the ability to empathize. If you’ve seen me write elsewhere, you know that I’m a fan of Charmed (both the original and the latest reboot). It was Charmed where I found my love for McMahon, and his character dated, married, and divorced a witch who was an Empath (although not at the time he was on the show).

But I digress. The ability to offer a lead role who empathizes helps FBI: Most Wanted to stand out. It offers something different, stepping away from the cliches. We need this in the world, showing that a man can be empathetic and in a lead role; that the ability to empathize isn’t a weakness. So, please, bring us more of this.

What would you like to see from the FBI: Most Wanted writers? What do you think of Jess LaCroix? Share your thoughts in the comments below.

FBI: Most Wanted airs Tuesdays at 10/9c on CBS.